Went Broke on the Way Up: No

SkaiWalkurrr's first taste of poker was watching Rob Hollink versus Brandon Schaefer in the 2005 EPT Grand Final.  "I proceeded to read and watch everything about poker that I could get my hands on," says Skai  "I played every freeroll I could find, I even downloaded every episode of the World Poker Tour and World Series of Poker that I could find."

After about a year of digesting poker shows and playing freerolls, SkaiWalkurrr deposited $50 and started grinding 1 cent - 2 cent and 2 cent - 5 cent no limit games, making a very small amount of money.  He took $50 out of that and deposited onto Full Tilt, deciding to play cap games.  "Even though I was very new and only played the 5 cent - 10 cent level, I knew cap games were for me.  I knew the impact of the short stacks, the implied odds hands for example, and just ran like god."

Indeed, SkaiWalkurrr was at the $5-10 blind level after only 3 months, without having had to move down a single time in that initial run. 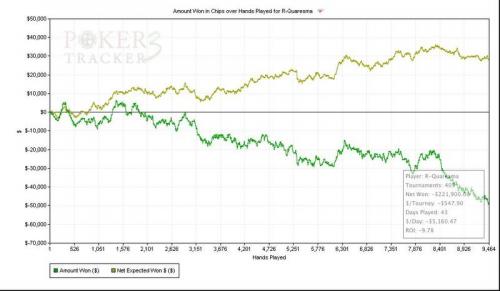 (above) Variance - SkaiWalkurr hits a -300k below expectation run in $5k buyin games.

SkaiWalkurrr was extremely aggressive in taking shots.  During some shot staking struggles at $25-50, he decided to enroll in college, calling it "the standard thing to do."  But he dropped out after just two months.  "I didn't open a single book outside of school," said Skai.  He soon after had a bad run at levels as high as $100-200, dropping his bankroll from about $200,000 to under $20,000, but grinded it back up from there.

SkaiWalkurrr initially only played regulars in heads up sngs for fun, only taking them up seriously after facing Heybude.  Eventually he found super turbos, and began to play those almost exclusively.  Between May 2010 and May 2011, he made about $600,000 in super turbos after rakeback, in about 25,000 games with an average stake of over $900.

After Full Tilt's closure, SkaiWalkurrr began playing hyper turbos full time on PokerStars.  From July until September of 2011, he had made about $95,000 in about 11,500 games. 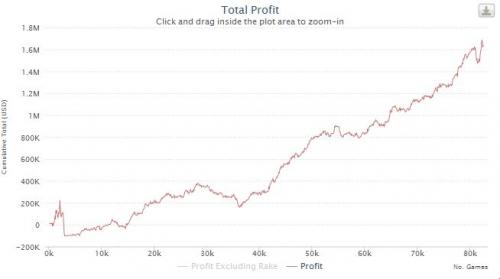 what about his battle with piggybank ? that gets no mention ?

I wrote this before that

I wrote this before that happened I believe. Did we have a thread by Charles Hawk covering it? If I can find it, I'll add it to this page.

He started playing HU SNGs after facing me HU? That's interesting to hear. I remember distinctly playing him having never seen his sn before. I actually went on 2p2 and asked about him because I thought he played really well. He had such an optimal looking strategy, something you didn't see often at the time at HU SNGs. Did he tell you what about playing me inspired him to want to start doing HU SNGs?

He said this is the post of yours that inspired him:
12-17-2009 - "Idk if anyone knows who this is but I played a guy named "Skaiwalkurrr" today on stars and he was the best hu sng player ive ever played. I'm interested if he's some well known guy I've never heard about."